Vigilantees is a book about t-shirts, the folk that design them and the companies that print them. That’s the idea anyway. 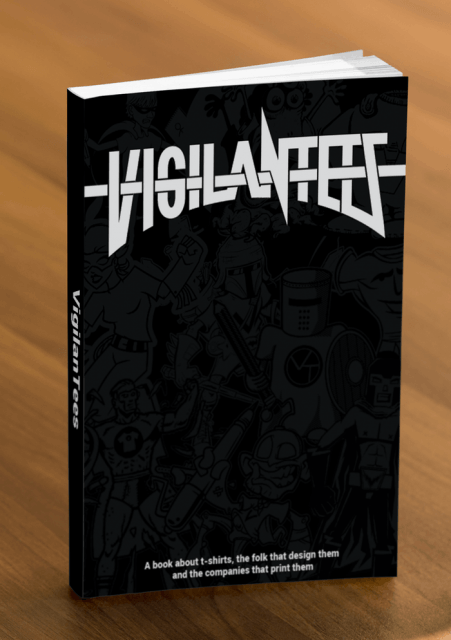 This Kickstarter project was started by Duncan Craig aka Zombie Media, who is one of the folk that designs t-shirts. He contacted me at the beginning of the Kickstarter campaign but I am only getting around to it now, with just 10 days left to go.

The book will feature the following artists:

If you follow the Shirt List you will surely be familiar with most of these names. And here is a list of the stores that will be featured:

After a quick look at the campaign the first thing I wondered was of course who would want the book. I guess that most of the designers featured in the book would want a copy. That’s 25 at the moment, if everybody wants in. And perhaps the t-shirt companies featured in the book might also want a copy or two. That seems to be 12 stores so lets round that up to 25 books. That’s a total of 50 books or so that might be in the bag before the campaign begins, if you are being optimistic. Lets say that they all pledge £65, that’s $3,250. The goal is $17,000.  I thought that it was a pretty ambitious goal and it seems I was right because as of today the funding has only reached £2,261 with just 9 days to go. (A few hours passed since I started writing this post.)

The second thing I wondered was why such a campaign was necessary. I’m not talking about the book here but rather the Kickstarter campaign. These days we don’t need a lot of cash to get a book made. There are plenty of print-on-demand services available for this such as Blurb, Montage, Mixbook and Lulu.com. I don’t think you would be able to print very big books for £25 but I don’t think any book will be printed from this Kickstarter project unless there is some late interest.

My only gripe is the cash really. I mean Robert Rodriguez supposedly produced his first movie for $7,000 and this is just a book.

I know there are other rewards such as postcards and t-shirts but and inaction figures but they are just extras. The tees could be sold on POD sites and the post cards could be offered as free downloadables. People could use them as wallpapers, or even print their own postcards if they wanted to.

OK, enough negativity. The book itself would probably make a great coffee table book that might inspire some new artists and give insights to existing artists. Hopefully the interviews will be entertaining and useful. The art is certainly fun and clever.

There are just 8 days left to go (I know, there were 10 when I started this post.) so if you want a copy of this book you will not only have to pledge some money you will have to spread the word and get your friends and family (and maybe co-workers and enemies too) to do so.